Point Loma Nazarene University's Ryan Library created this web site and the library's display cases, Spring Semester 2017. Some links may be accessible only to members of the PLNU community. 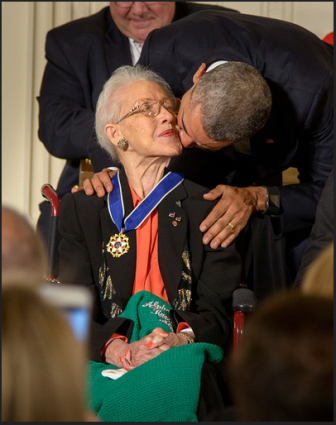 "When the computer wore a skirt"

A person can make an impact for civil rights in a quiet manner.  Meet Katherine Johnson.  She loved numbers.  Her father helped her find a West Virginia high school that would accept black students.  Her love of learning lead her to complete high school at 14.  She completed college at 18 with degrees in French and mathematics.  She eventually came to NASA to calculate space missions trajectories.  Astronaut John Glenn specifically asked that she run the same numbers for his space flight that the computer was given.  She won the National Technical Association's Mathematician of the Year award and three of NASA's own Special Achievement Awards. With her 33-year career at NASA Katherine Johnson opened doors for all women in science and mathematics. She is quoted as saying "Some things will drop out of the public eye and will go away, but there will always be science, engineering and technology,"

This excerpt is from "Katherine Johnson Was a STEM Trendsetter Before There Was STEM" from Christian Science Monitor, August 23, 2015

Katherine Johnson: The Girl Who Loved to Count

She Was a Computer When Computers Wore Skirts