This guide provide further reading and resources in support of the One Book One San Diego book of the year. 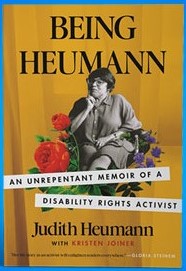 This year's One Book One San Diego title Being Heumann is a moving, candid, and highly engaging account of Judith Heumann's lifelong fight as a disability rights activist. The history of disability rights is deftly woven throughout the memoir's narrative, since Judith led and experienced many defining moments, including the 1977 San Francisco Section 504 sit-in, firsthand.

You may borrow a copy of Being Heumann from Ryan Library, or, if you have a permanent address in SD County, you may borrow an electronic edition from San Diego County Public Library to read on a computer or e-reader; to borrow the ebook, visit this link and set up an account.

Book Summary from the publisher:

"One of the most influential disability rights activists in US history tells her personal story of fighting for the right to receive an education, have a job, and just be human.

A story of fighting to belong in a world that wasn’t built for all of us and of one woman’s activism—from the streets of Brooklyn and San Francisco to inside the halls of Washington—Being Heumann recounts Judy Heumann’s lifelong battle to achieve respect, acceptance, and inclusion in society.

Paralyzed from polio at eighteen months, Judy’s struggle for equality began early in life. From fighting to attend grade school after being described as a “fire hazard” to later winning a lawsuit against the New York City school system for denying her a teacher’s license because of her paralysis, Judy’s actions set a precedent that fundamentally improved rights for disabled people.

As a young woman, Judy rolled her wheelchair through the doors of the US Department of Health, Education, and Welfare in San Francisco as a leader of the Section 504 Sit-In, the longest takeover of a governmental building in US history. Working with a community of over 150 disabled activists and allies, Judy successfully pressured the Carter administration to implement protections for disabled peoples’ rights, sparking a national movement and leading to the creation of the Americans with Disabilities Act.

Resources and Articles on Disability Rights and Related Topics

Peer-reviewed journals on the topic:

Crip Camp is a documentary featuring Judith Heumann as a camp counselor and leader at the camp.

"A groundbreaking summer camp galvanizes a group of teens with disabilities to help build a movement, forging a new path toward greater equality."

One Book, One San Diego is our region's premier literary program, presented in partnership between KPBS and over 80 public libraries, service organizations, universities, and other educational institutions. Now in its 15th year, the purpose is to bring our community closer together through the shared experience of reading and discussing the same book. Ryan Library is a proud partner. For a calendar of events, visit kpbs.org/one-book/.

Behind the Book Video Series

Ability360 has produced a multi-part video series exploring the history, themes and lessons within “Being Heumann: An Unrepentant Memoir of a Disability Rights Activist” by Judith Heumann and Kristen Joiner. Watch below.

These books are available through Ryan Library. The print books include a call number and the ebooks require a PLNU OneLogin. 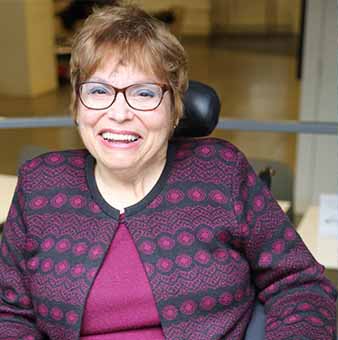 "Judith Heumann is an internationally recognized leader in the Disability Rights Independent Living Movement. Her work with a wide range of activist organizations (including the Berkeley Center for Independent Living and the American Associate of People with Disabilities), NGOs, and governments since the 1970s has contributed greatly to the development of human rights legislation and policy benefitting disabled people. She has advocated for disability rights at home and abroad, serving in the Clinton and Obama administrations and as the World Bank’s first adviser on disability and development. She lives in Washington, DC.

Judith Heumann's TED Talk: Our fight for disability rights -- and why we're not done yet

TED Talk Summary: Four decades ago, Judith Heumann helped to lead a groundbreaking protest called the Section 504 sit-in -- in which disabled-rights activists occupied a federal building for almost a month, demanding greater accessibility for all. In this personal, inspiring talk, Heumann tells the stories behind the protest -- and reminds us that, 40 years on, there's still work left to do.